Italians love to celebrate Christmas. You might think we start on December 24, to finish on January 6, when we celebrate the Twelfth Night. But the truth is that we can start even earlier, generally when we celebrate with friends and coworkers the upcoming Christmas. In oder words, we try to find occasion to open and eat a Pandoro or a Panettone. 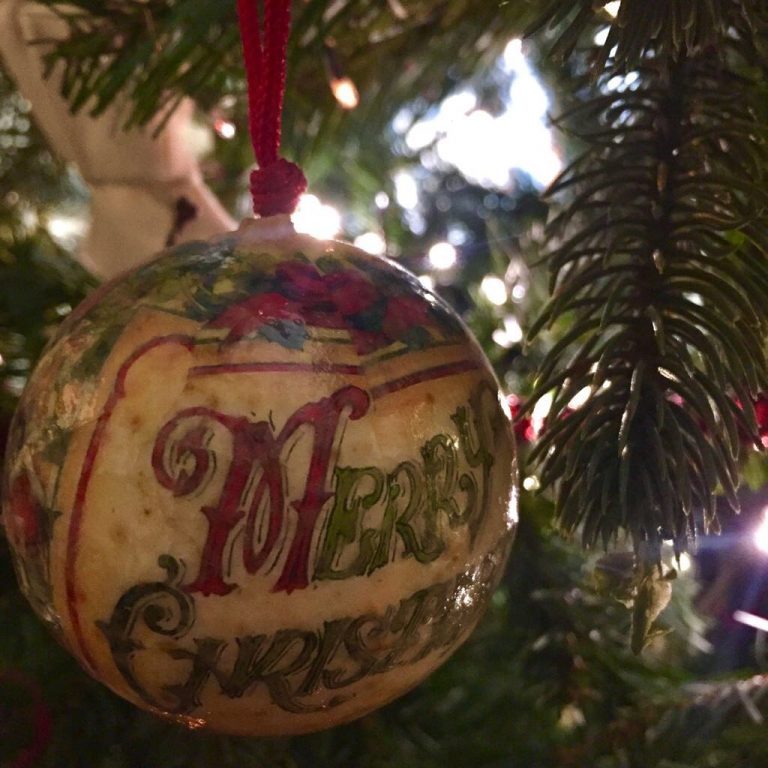 A ball from my Christmas Tree

But first: Pandoro OR Panettone?

When Christmas approaches, in Italy one is the recurrent question you might hear: do you prefer Pandoro or Panettone? To me, the first prevails on the second, but both equally resist on our tables. We generally open one of both and we serve them with a glass of fresh Spumante or sweet wine.

That curious case of candied fruit.

Certainly, one mystery has never been solved. According to my personal research (aka I asked my family and friends),  90% of Italians hate the candied fruit Panettone contains. It is easy to see us eating it but gently picking up the candied fruit and leaving it on the plate.

So why do Panettone producers continue to produce large amount of Panettone with candied fruit? And why do we continue to buy it? This is something that will remain unanswered, so take it as it is and do not get surprised if you’ll see us in this curious act of candy fruit marginalization.

As everything related with food, also Panettone and Pandoro have their History, variety and traditions. Even producers might add their personal touch with ingredients and procedures passed down from generation to generation.

This sweet comes from Milan, has a cilindric base and the shape of a cupola on top. Its origins are almost legendary.
Two seems the most plausible stories.

The first one talks about Sirrah Ulivo degli Atellani, a falconer, who lived in the Contrada delle Grazie in Milan. Since he was in love with Algisa, the beautiful daughter of a baker, he was hired by his father as a shop boy. To increase sales, he tried to invent a dessert. It took the best flour of the mill, added eggs, butter, honey and raisins and then baked what he had obtained. It was an absolute blast. Everyone wanted to taste the new cake and, some time later, the two young lovers got married and lived happily ever after.

According to the second version, the cook of Ludovico il Moro, Duke of Milan in the 15th century, was asked to prepare a banquet for the Duke himself and other nobles. He prepared a great feast but forgot the cake in the oven which burnt. The little kitchen boy, Toni, suggested to use a dough he had prepared earlier in the morning mixing flour, butter, eggs, raisins and the cedar zest. The cook agreed to serve it but stood behind the curtains waiting for the reactions. It was a success. When the Duke asked the name of the cake, the cook answered : it is the “pan de Toni”, the bread of Toni, which eventually became Panettone.

From being the handmade product of bakers and pastry makers, in the XX century Panettone started to spread all around Italy.

The traditional version consists in a sourdough with a very slow leavening. It is filled with raisins and candied fruit like cedar, lemon and orange zest.

From supermarkets to gourmet bakeries.

You can find plenty of Panettone varieties. It can be cheap, you can find panettone at the supermarket for 4/5 euros, or expensive if you consider the artisanal ones made in renowned bakeries or patisseries.

Panettone and its many varieties.

If a perfect world is possible, it certainly boasts Panettone without dried fruit. My favourite is, in fact,  the one with a chocolate crust,  Piedmontese hazelnuts on top  and pieces of crunchy dark chocolate pepita inside.

And it can be also salty, like the Panettone Gastronomico, a salty version with flour, butter, eggs but of course no sugar. It can be filled with ham, vegetables, mayonnaise and can be the perfect appetizer to start a sumptuous meal.

Even if in the ancient Rome there was a cake prepared with flour, butter and eggs, the origins of Pandoro have to be found in the homeland of Romeo and Juliet, Verona. But before arriving in Verona, we have to stop in Venice. Here there was a bread called Pan de Oro, bread of gold, whose recipe dates back to the 13th century.
The current recipe is an evolution of the 19th century of a cake famous in Verona called Nadalin.

Pandoro has a frustum base that ends with an eight pointed star and is covered with vanilla flavoured icing sugar. 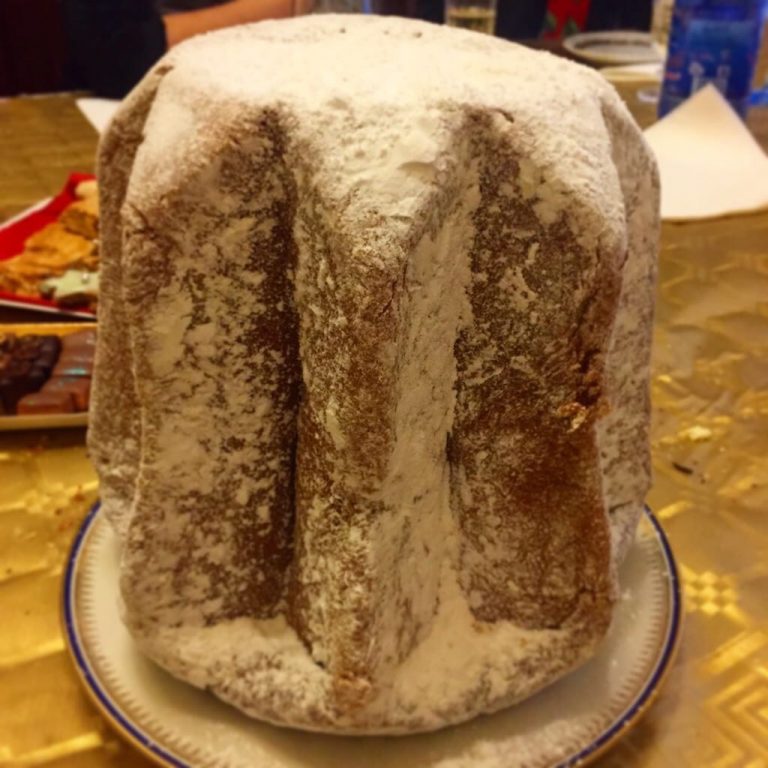 Also Pandoro can be extremely cheap. You can find good ones for few euros and then enrich them with the cream you prefer. The easiest way is to prepare or use an already made chocolate cream, or simply mix mascarpone and sugar. You just have to cut it horizontally one or two times and then spread the cream. A widely spread tradition is to leave it on the heater and eat it warm with Nutella and cappuccino the morning after Christmas.

But if you are in Torino, you must try Ghigo’s version called Nuvola. The name means cloud, as it reminds of a white cloud. 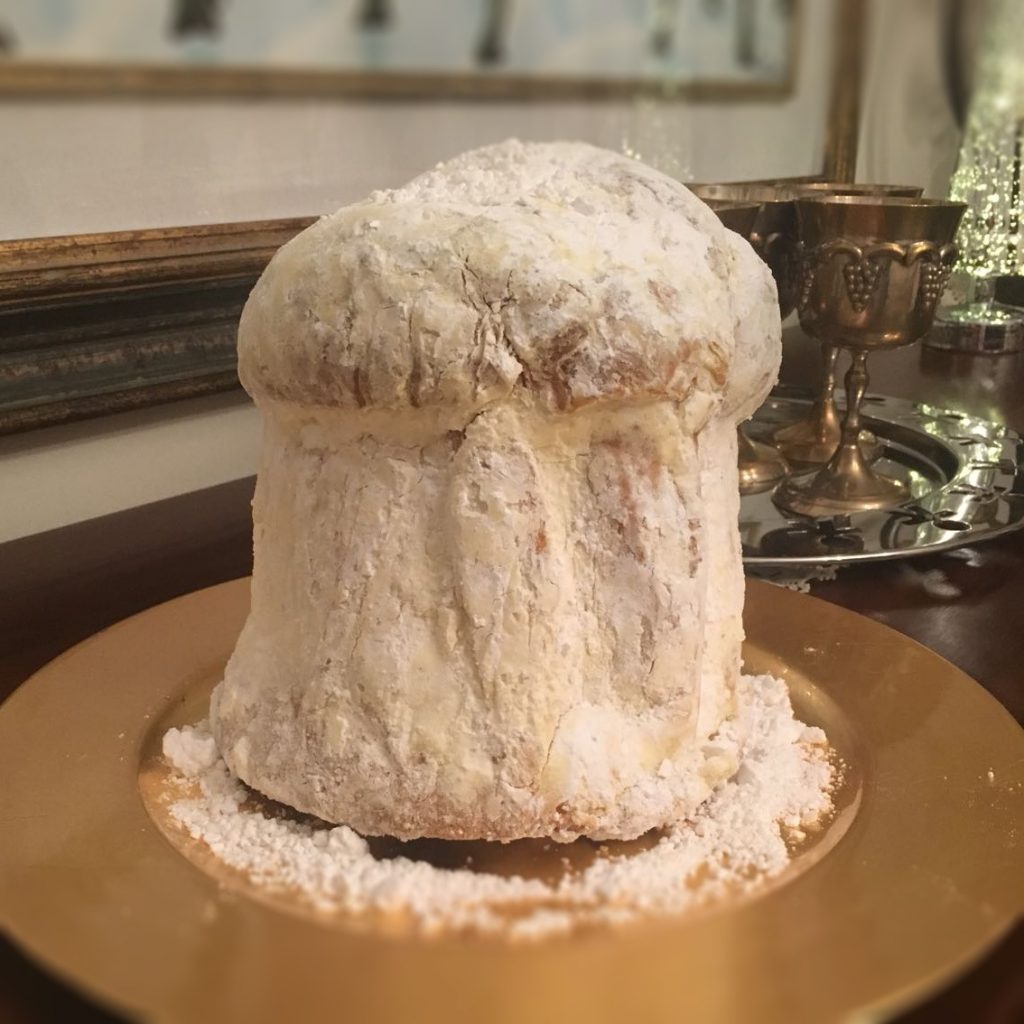 Ghigo is a patisserie that dates back to the mid of the 19th century. Its renowned Pandoro with natural leavening is covered with a butter cream and icing sugar. It is simply delicious.

Previous Post: « Kirkuk Kafe: a Kurdish corner in Torino
Next Post: Visit the lovely Catania, a city full of legends and myths »