Home » Meeting » Africa under the Mole 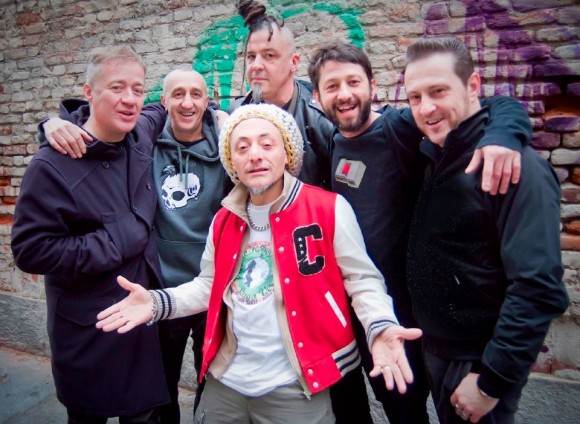 Africa Unite is an Italian band based in Pinerolo, near Turin. It’s a raggae band founded in 1981 by Madaski and Bunna. The name comes from a Bob Marley’s song, beloved artist who will always inspire them through the years.
An italian writer, Giuseppe Culicchia, described Madaski as “the perfect link between man and synthesizers”. Here are the key words to enter AU world: raggae and electronic. When I heard Madaski at a University lesson (yes he did it!) he said “our music is not just raggae, as we are not in Jamaica. We live in Italy, in a different culture/environment that’s why we could never play pure raggae. We revise it according to our background and way of life”. Well, that was the point, something like 8 years ago. Gosh, I feel old.
Their first album was Mjiekrari, published in 1986 and the second one Llaka, that came out in 1998. They started touring in Turin’s clubs, and the succes arrived with the third album, People Pie, in 1991. At the beginning the songs were in English, but with Babilonia e Poesia (Babylon and poetry) they started singing in Italian. Other album followed (Un sole che brucia/a sun that burns, In diretta dal sole/live from the sun, Il gioco/the game, Vibra/vibrate, a Bob Marley tribute, Mentre fuori piove/while outside rains, Un’altra ora/another hour).
Madaski also made a solo album, Dance or Die, and has a parallel project called n.a.m.b. (I love their black hole sun version).
One of my favourite song is from Vibra, and the title in English is Under Pressure. The sentence that seems to perfectly describe our (well mine for sure!) life says: I’m not looking for tensions, I have nothing more to loose, all I know is that under pressure I give my best and I feel better.
Last year they published Controlli/controls.
In their songs you can find politics, love, relationships,  pictures of their travels,  a description of my Turin, and an heavy critic of the word we are living in. If you do not know Italian just seat and listen to the velvety voice of Bunna. Experience my Africa.

Previous Post: « Alba is not amazing for food and wine
Next Post: You’ve got to love the Italian sense of humor »